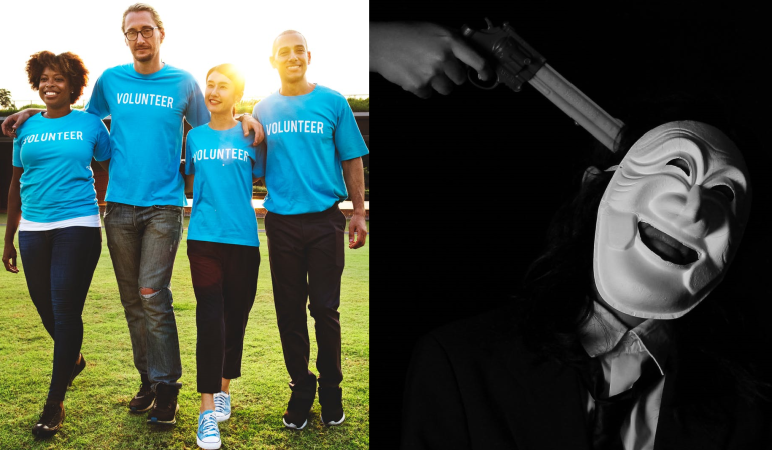 Find all additions to this series by clicking here!

For this article it would be pretty much impossible not to touch upon religion given as ‘evil’ is a construct more or less rooted in it. As an atheist, I always approach the subject a little tentatively. Not because I fear offending the religious; that doesn’t bother me in the slightest. It’s more because I have that sensation that I’m dabbling in something that I don’t fully understand. There again, I suppose I could argue that nobody actually fully understands religion. Let’s face it: they don’t!

I think the lines of good and evil can be, and often are, blurred depending on that old chestnut, something I’ve raised several times in this series, perception. An act we perceive to be inherently good ourselves may be viewed as something indescribably evil to another.

I’ll throw forth a paradigm, the first one to have come to mind: an alcoholic craves booze and depends on it. As an act of benevolence, you pour away every drop of booze there is in the house so that said alcoholic can’t drink any. On the one hand, your act is wholly good. You’re saving that alcoholic from themselves. You know that drinking is destroying that person and that it’s surely benefitting them not to drink anymore. On the other hand, the alcoholic desperately wants that booze. If they don’t get it then they’re going to suffer withdrawal symptoms. They might self-harm. It may have a major psychological impact that could result in their death. That alcoholic views you as evil for doing what you’ve done. Who’s right and who’s wrong in this scenario?

As you can see, the waters of good and evil are muddy to say the least. I’ve had people do things in my life that they thought were the good and right thing to do; their act has left me feeling disillusioned and resentful because it came across as simply nasty, even evil.

One of the worst examples, and this has happened a few times, is people stepping away from me ‘for my own good’. They’ll be a regular or even constant presence in my life for an extended period and then suddenly decide, without warning, that their presence is detrimental to me. They make that choice on my behalf for what may well be a benevolent reason; all I see is that they’ve left me high and dry. Their act appears the very opposite of what they claim to have performed it for. All I think is that they suddenly don’t want to be in touch anymore after building up my hopes and, in some cases, feelings towards them for so long. I don’t see kindness in their choice; all I see is cowardice. All I see is someone who’d have sooner run away from a problem than face it and left me to pick up the pieces and work out what went wrong for myself. Who’s right and wrong here? Is that person good or evil?

I believe beheading a person in the name of Allah, or any other deity, is a very evil thing to do; the extremist who did it thinks they’ve done a great and glorious thing to appease their god. Certain religions teach us that to be gay is a sin aka evil; modern standards tell us that it’s absolutely fine to be gay, which, of course, it is. Where do we draw the line when it comes to good and evil?

I’ve always defined myself as neither good, bad, nor evil. I’m a person who’s capable of acts that could be construed as good, bad, or evil depending on the circumstances. I’d like to imagine I’m good in the main. I care about people and I’m very empathetic. I dote on my son and do the best I can by him. On the other hand, I’ve cheated, lied, stolen, and a host of other undesirable things. It all peters itself out, I think. And, again, perception.

In conclusion, I feel the idea of good and evil is not a complete one. It has too many holes to keep any water held in it. There are acts that are not good at all, such as murder, rape, abuse, and so on. Most of us will agree they’re all bad, but you can rest assured there are people out there who don’t think they are, which makes even those awful things a contentious issue depending on who you talk to. I guess this is one of those situations to which there’ll never be a straight answer and it really does come down to the beliefs held by the individual. The conclusion is that there is no conclusion *Spreads hands*