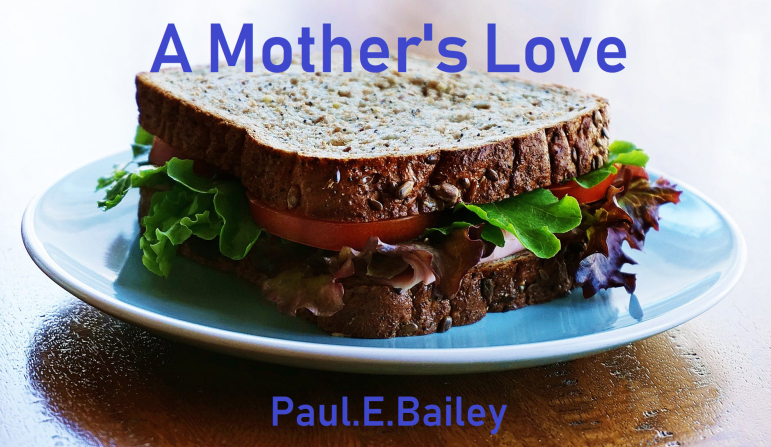 The butter had softened sufficiently for Vera to spread it with ease across the four slices of nutty brown bread she’d set out on the chopping board. Buttering complete, she laid out the ham pieces she’d cut off the shank onto two of the slices.

A rhythmic knocking disturbed her from her sandwich-making practice. “Shut up!” she demanded, continuing to place the ham so that as little of the bread as possible could be seen underneath.

Satisfied with that, she then moved her focus onto the mixed leaves only for the knocking to distract her again. “I won’t tell you again!” Vera looked behind her and noticed a shadow through the door window. “Oh! Oh, blimey! Just a moment,” she called, moving to the sink and cleansing her hands in warm water.

With a nimbleness that belied her seventy-two years, Vera retrieved a dishtowel en route to the front door and dried her hands. She opened up to be greeted by two police officers and broke out into a wide, friendly grin. “Well, hello officers. What brings you here today?”

“Good afternoon, ma’am. I’m Sergeant Grimes and this is Constable Short,” Grimes offered, gesturing to the attractive young officer next to him.

“My, aren’t you a pretty thing?” Vera complimented.

“Thank you,” Short responded, ensuring not to allow the flattery to go to her head.

“Sorry to disturb you, ma’am—”

Grimes smiled. “Okay, Vera. We’re wondering if you might have any information regarding a missing person. Martyn Collins went missing two weeks ago; he was last seen in this area.” He held up a couple of photos of a man in his mid-thirties.

Vera studied the photos intently but with incomprehension. “I feel as though I could’ve seen him once or twice; maybe whilst shopping in town. Other than that, I can’t say I know him.”

“Do you not recall seeing him around this area at all on 18th June?” Short asked.

“My days pretty much roll into each other. I can’t say anything out of the ordinary has happened in a while, though I am in my own bubble a lot of the time.”

“Have you heard nothing at all mentioned in the last fortnight?”

“I’m sorry, Sergeant Grimes.” Vera looked apologetic before breaking out in a smile. “I’m just making ham salad sandwiches. Would you both like one?”

“Thank you for the offer, Vera. Unfortunately, we must be getting on. If you hear anything at all as to the whereabouts of Mr Collins please contact the local police. His family are very worried.”

“Of course. I hope he turns up safe.”

The police officers turned and began to walk away. Vera remained at the door to watch them as they left, offering friendly smiles and waves whenever they turned around to look. Once they were out of sight, she closed the door and returned to the kitchen where she pressed a button on her house phone. It promptly began to ring while she went back to her sandwich making.

A gruff voice filled the room after several rings. “Hullo?”

“What’s wrong, he asks! Get ‘round here and tidy up your mess!”

“Listen to me, you little shit! I’m not here to clean up after you. You’re big enough and old enough not to be relying on your pensioner mother. Now, you get here and do as I bloody well say!”

After several seconds of silence there was a petulant sigh. “Alright, mum. I’ll be there in a few hours. I just need to take care of something first.”

“Be quick about it!”

The call was terminated and Vera plated up the ham salad sandwiches. She carried them towards the door under the staircase and opened it up. There, amongst a stash of vegetables, was a man bound and gagged, who looked up at Vera with pleading eyes.

“I’ve brought you some lunch,” she said, removing the gag from the man’s mouth.

“How much longer are you going to keep this up?” he spat.

“Hey! Now, you know fine well that I don’t like attitude, young man!”

“Okay… I… I’m sorry. I just don’t understand why you’re doing this.”

“You’ll find out soon enough. Don’t hate me, Martyn; I’m just the middleman in all of this. The last thing I want is to keep people tied up in my larder.”

He flinched as she approached and stroked his hair but greatly accepted the ham salad sandwich she placed in front of his mouth. As crazy as the old woman was, her food was excellent. Even something as simple as a sandwich was made to perfection. As afraid as he was, Vera actually hadn’t once harmed him physically. She’d told him off for shouting and swearing; that was about it. He wolfed down the sandwich with grateful hums.

“Don’t worry. You’ll be out of here by this evening.”

“You’re letting me go?” he asked between chews.

“I’m not letting you go exactly. You’re moving on.”

“Moving on? Please… why are you doing this? I’m nobody. I haven’t done anything. I don’t owe money to anyone. I haven’t harmed a soul. Why am I being kept hostage?”

She shushed him. “That’s enough now. Finish your sandwich. I’m sure you’ll be fine.”

“I don’t want to finish my sandwich.” Martyn was becoming frantic. “I want to know why I’m here. Please, tell me what you want from me.”

“Oh, dear. It seems like you need calming down again.”

“It doesn’t take long; you know that by now,” Vera reassured as she retrieved a hypodermic needle from off a shelf in the larder. She held Martyn’s head still with a vice grip not many would have expected a seventy-two-year-old woman to possess and slipped the needle into his jugular whilst pushing the plunger. “We all make choices that we didn’t realise were bad ones; you’re just another victim of unfortunate circumstances.”

Martyn tensed and let out an anguished whimper. Within ten seconds he was out cold.

Vera replaced the gag and looked solemnly at what remained of the sandwich. “Such a waste! I suppose I’d better finish it.” She backed out of the larder and closed the door.

As she walked through to her front room, she shook her head. “That son of mine will drive me to my grave with his possessive jealousy. The things we mothers do for our sons!”