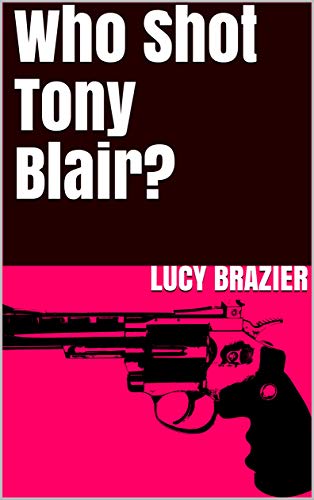 I’m really excited to be sitting down and writing this review because it gives me a great buzz to be reviewing the work of an indie author, fellow blogger, and friend.

Yes, Lucy Brazier is one of many wonderful people I’ve happened across on my blogging travels (be sure to catch her excellent blog, Secret Diary of a PorterGirl). Her writing style immediately drew me in. Then I was treated to her wicked sense of humour, influenced by such things as Red Dwarf and Bottom, my two absolute favourite sitcoms. People don’t come much more honest, funny, and intelligent than Lucy, and I say with absolute conviction.

Now I’ve no doubt made her blush, I think I’ll crack on with the review of her self-published title, Who Shot Tony Blair?

Lucy is a crime fiction writer, as evidenced by her very popular PorterGirl series of novels, which she has said on her blog is heavily influenced by Agatha Christie’s Poirot. I don’t know much about Poirot other than the fact David Suchet played him for a long time in the TV series, that the theme music amused me for some reason, and that Hercule Poirot has an epic moustache! I don’t know much about murder mysteries at all truth be told. They’ve never quite appealed to me.

So, what made me want to read Who Shot Tony Blair? if I’m not sold on murder mysteries? A few things actually: Lucy herself, because she’s such an entertaining writer; the blurb, because the synopsis was just too insane for me not to be intrigued; finally, I wanted to feel good in supporting a friend and fellow author.

I bought the book for £5.99 off Amazon (plus whatever the cost was for posting) and it was with me just a couple of days later. It became my reading material on the bus to and from work. I got so many funny looks from people because there were parts where I literally couldn’t hold in my laughter; it is hilarious!

To keep it simple, the story is set in 2028 in post-Brexit, pre-dystopian Britain. The traditional political system has fallen apart and each area of Britain has become independent. Lucy Wastell is the Prime Minister of East Anglia and resides at 10 Downing Street, Cambridge, while a man named Boris (yes, that Boris) has crowned himself King of Oxford. The two factions are on the verge of war, but one man holds the key to preventing it: disgraced former PM Tony Blair. He’s been kidnapped by the CIA (Cambridge Intelligence Agency) and is tied to a chair in the kitchen. Big, bad, and daft things are about to happen that I won’t go into any further detail about plot wise. Spoilers are something I like to keep to a minimum.

There was nothing not to love about this story. The characters were all fantastic in their own way, the plot was excellently thought out, and the humour was the right blend of clever and smutty. The question of who shot Tony Blair becomes kind of inconsequential as you get lost in all the other barmy things that are going on.

One of the things I absolutely loved about this book was some of the made-up ministerial positions. The best by far, and it always brought me out in smiles (I’m smiling now in the build-up to writing it), was the Minister for Good Ideas & Gin. The fact the minister was called Dr Martens brought me out in giggles too. As a result, gin features heavily throughout. Gin itself is often deemed a Good Idea! I’m such a fan of silliness and this book delivers it in spades. Really big spades!

Nigel Farage is a central character and rarely has any pants on. King Boris too for that matter. There are coverups, elaborate schemes, a dashing spy, and, of course, murder. It pretty much has it all.

I want to be critical and deliver some of the less brilliant points, but I genuinely can’t think of any. I’d have happily sat and read this book cover to cover with no breaks if I could have. Lucy writes in such a captivating way that you can’t help becoming hooked. You want to know what happens next with every chapter. What makes it all the more endearing is that you can tell Lucy really enjoyed herself writing this. It was like she was let off the leash, so to speak, and was able to go a bit bonkers in a way she usually doesn’t.

You have to read this book. You don’t have to be of a political mindset or a fan of murder mystery crime fiction to enjoy this; I am neither myself! Lucy is a truly gifted author and I’m humbled to be friends with someone of such great talent; however, even if I didn’t know her, I would have thought Who Shot Tony Blair? was brilliant regardless.

Verdict: Stop wasting your time reading this review and get purchasing Who Shot Tony Blair? you idiot!

Hear more about Who Shot Tony Blair? by watching Lucy’s interview on YouTube.

Buy it from Amazon by clicking this link.

Lucy’s PorterGirl series is also available on Amazon. Find First Lady of the Keys, The Vanishing Lord, and Sinister Dexter by clicking each individual link.