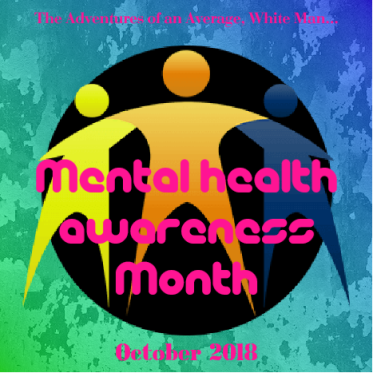 I’m tying in this series to Mental Health Awareness Month as I feel the two are quite substantially linked. This series has always predominantly been about my writing and offering an update on how it’s going. In this edition, I’ll talk about why I write.

The reason only became clear to me once I was diagnosed with depression and generalised anxiety disorder. I write as much and as often as I can, sometimes in times and places where it isn’t really convenient. It was easy for me to say I was obsessed and/or dedicated to my craft before I knew what was wrong. I now realise it runs much deeper than that.

In essence, writing is my crutch. It’s the thing that calms me down in a world that does nothing but create angst, guilt, despair, and a host of other negative sensations in my mind. It’s not only my way of making sense of life; it’s my way of escaping it entirely. When I write fiction, I’m visiting alternative worlds and realities that release me from this one. When I write non-fiction, I’m picking the bones of life apart and working it all out. Writing is the thing that keeps me from going crazy!

It pains me to say that life is hard when I’m a first world citizen with immediate access to food, water, electricity, a bed, money, and a tonne of trinkets that I rely on like they’re vital but really actually aren’t. I have it pretty damned good in comparison to billions of others out there.

Having said that, I don’t feel guilty for saying that life is hard. I don’t buy into the philosophy that I should be eternally grateful because someone always has it worse than I do. Somebody always has it better as well, so I’m justified not to be grateful by that yardstick. I think people are entitled to think what they think and feel what they feel. It’s nobody’s place to tell them they’re wrong for thinking or feeling anything. Besides, if we were all permanently satisfied with our lot then there’d be nobody pushing the boundaries and bettering themselves.

No, people of the first world are very entitled to think life is hard. They’re very entitled to feel down in the dumps about things. This is our way of life and we live it differently to those in the second and third world. That isn’t our fault and it’s nothing to feel guilty for. I appreciate that people in the third world don’t know where their next meal is coming from and don’t have clean water to drink. It’s truly awful and I wish that wasn’t how things were for them. I don’t, however, feel guilt derived from the fact that I have everything they might wish to have, nor do I feel guilt for the fact that I’ve succumbed to mental illness despite being a first world citizen.

Apologies for that segue. I felt it needed saying. Back to the case in point…

It’s always said that people who suffer from mental illnesses should find coping strategies, things that calm them down or raise their spirits. Writing has been my go-to for the last few years now. Sometimes music—listening or mixing—is the best relief. Seeing my son is always a good one too, although he can often promote anxiety as well because he’s absentminded and I genuinely fear he might wander in front of buses or whatever! There are other little things that can help aside from these, but writing is the number one. I’ve taken to doing it on the bus to and from work to ease my social anxiety and when I get downtime at work because work in itself is stressful.

I think the main reason I always find myself yearning for novel writing is because it gives a better opportunity to immerse myself in an alternative reality that I created and have control over. A lack of control in the real world is part of the cause for me slipping into mental health issues. Life seems to be about doing as I’m told and following rules whilst being told that I’m free to make my own choices and live the way I wish. The contradiction gets on my nerves! When I write, the rules, grammar aside, no longer apply. It’s my creation and I decide what’s going on. Nobody can tell me I’m not to do this or I must do that in my writing. If they did, I’d tell them where to go.

I don’t know what other people get out of writing. I’m sure we have our own personal journeys. There are probably those who write and don’t even like it at all. The craft does so much for me. It’s a task that soothes me when I’m not feeling great in my mind. It’s a way of creating things out of nothing. It’s a way of living an alternative life. It keeps my conscious mind active and feeds my subconscious mind. I enjoy it. I love it. It’s challenging and rewarding in equal measure. It can take a crappy day and turn it into one of great achievement and pride.

For advice on how to find coping strategies for stress, anxiety, and depression, you may find the following links useful: