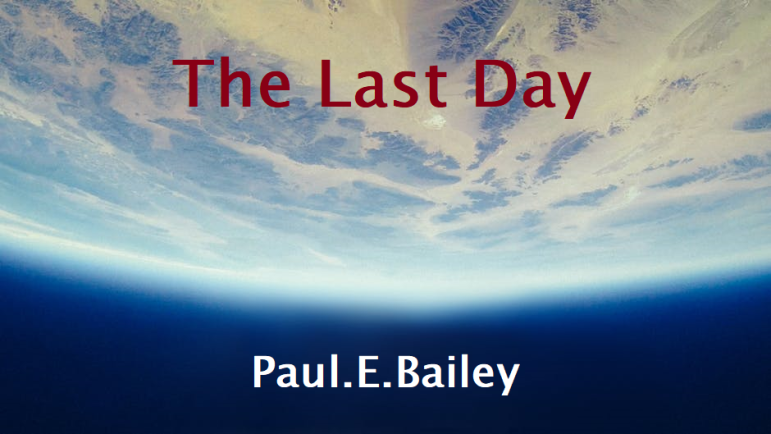 Instead of sleeping, he’d taken a cocktail of different drugs and allowed himself to bask in a psychedelic experience. From cocaine to ketamine and a whole bunch of stops in between, Haruna had been on the weirdest and wildest trips imaginable from the comfort of his own tenth-floor apartment.

Haruna was a twenty-six year old man who’d been born in Nigeria and moved to Spain at a young age. His life hadn’t been a particularly special one; he was just another working man like so many others. There had been dreams there for him to pursue, but he hadn’t put any real energy into chasing them. At least he could claim to have had a reasonably happy life. There had never been any major issues for him to deal with.

The news of the unavoidable asteroid strike came just two weeks ago. In secret, the world’s top governments had put their money and resources into finding a way in which to obliterate the ginormous floating space rock, roughly the size Wales. All attempts had failed. The asteroid would hit earth and humankind would perish. Underground bunkers were hastily prepared; however, scientists assured that such measures wouldn’t save those within them. It didn’t stop the egotistical politicians and celebrities from trying though.

When Haruna heard the news he was understandably scared and filled with fear. The streets of Seville had turned into a mass brawl as people looted, vandalised, and killed one another. He’d known better. He barricaded the door of his apartment and rationed the food he had remaining. He wasn’t sure why he’d done it, he was done for regardless.

Unlike one typically saw in apocalyptic movies, TV channels were no longer airing. No newsreader in their right mind was going to stick around just to tell everyone the latest and wish anybody who was watching a fond goodbye. Nobody was that dedicated to reading the news! They would want to spend their final days in the bosom of their families and loved ones.

Haruna thought about his family. His mother and sister lived on the other side of the city. There was no way they could reach one another before the riots started. They’d talked on the phone a lot until the signal disappeared. That was almost a week ago. How he wished he could see them one last time.

The drugs he’d taken were a secret stash he’d hidden for a friend. This friend was convinced he was about to be raided by the police and pleaded for Haruna’s help. Haruna reluctantly agreed. Figuring he’d never see the friend again, he started taking the drugs himself out of intrigue and boredom. It had been an enlightening few days.

He took a weary step out onto the balcony. It was a beautiful morning. His apartment was situated on the east side of the building and the brilliant sun illuminated the rooftops ahead with its heavenly glow. He looked towards the south. The bringer of death was now a very large light in the sky. To look at, the asteroid, whose name he hadn’t committed to memory, was actually rather beautiful. He figured it wouldn’t be long before it burst through the earth’s atmosphere. A couple of hours maybe.

A shrill cry broke the silence of the morning. Below, a woman stumbled down the street. She was soon caught by a pursuing man, who proceeded to tackle her to the ground. He slapped her hard across the face as he forced himself onto her.

Haruna couldn’t watch. He went back inside and closed the door so he wouldn’t hear what was taking place. Sitting down on the sofa, he lit up a cigarette. He slowly exhaled after a deep draw and watched the white plumes of smoke drift into the air above his head to hover eerily like an apparition before fragmenting into a light haze.

The tranquillity of his mind was disturbed by the thought of what was taking place downstairs. There was precious little he could do about it. To remove the barricades from his apartment door would take a good few minutes and then there’d be the jaunt down the stairs. By the time he got there, the man would likely have had his way and made a run for it. Besides, was it really worth risking his life for?

At that juncture, Haruna began to laugh. He laughed hard. Had he really just thought that? Was he actually concerned about being killed on the day the world was going to end? Amazing, he thought, how that yearning for survival doesn’t go away even in the face of impending doom. That hope he’d be one of the lucky few who didn’t meet their end continued to drive him on.

There was the feeling he should do more with his final few moments, that sitting there smoking wasn’t what he should be doing. What could he do though? He had three rooms in his apartment and no entertainment. The electricity had held up—something he’d mused on before today—but what good was that when no TV stations were operative anymore? All there was to watch on TV now was static. What could he do?

Stubbing out the cigarette, Haruna lit up another. He had four left after this and he intended to smoke every last one.

The action of smoking relaxed him. The relaxation hit him hard as his sleep deprived mind began to shut down. He attempted to fight it; the fight was a futile gesture. His eyes closed and the cigarette dropped from his hand to the floor where it harmlessly burned out.

The loud bang roused him immediately. It was a sound somewhere between an explosion and a gunshot. Shaking his head, he stood and ran immediately for the balcony. He looked south where a dark, smoky trail sat in the wake of a giant ball of fire that blazed a trail across the sky.

Haruna was awestruck. He was too agog by the sight to feel any real fear. It was at once horrifying and magnificent. The asteroid careened eastwards. He recalled hearing that it would land somewhere in Eastern Europe; Bulgaria or something. For it to have been as visible as this the thing must have been travelling at unbelievable speed.

He watched until the fireball disappeared from view. All that remained was its vapour trail, thick and black. This was it; the moment had arrived!

Looking down to the street below, his eyes immediately registered a limp form that stood out from the other limp forms he’d grown accustomed to seeing. It was the woman from earlier. Not content with merely raping her, the man had obviously murdered her too. Haruna felt bad that he hadn’t done something to rescue her. Yes, the world was about to end; that didn’t mean anyone deserved to die the way she had.

A sudden emotional pain surged through him. His heart dropped into the pit of his stomach. After several days of feeling euphoric, the reality of what was about to happen hit him hard. Tears formed in his dark brown and bloodshot eyes. He allowed the grief to consume him. The thoughts of all the people he cared about and the way they’d impacted his life came in nonstop waves. He’d never see any of them again. He’d never again share beers with his friend, Raul. He’d never again hear his sister, Veronica, make terrible jokes. He’d never again walk hand in hand with his ex-girlfriend, Esperanza, who he’d been trying to work things out with prior to all of this. It was all over—everything!

There was a distant rumble. He looked up and a frown crossed his face. The frown became a sneer. He drew in a deep breath and yelled at the top of his voice. “Screw you! I won’t let you take me! I go out on my terms!”

Haruna climbed feverishly onto the balcony railing and perched on top of it. He stood on wobbly legs, looked in the rough direction of the asteroid impact, raised the middle finger of his right hand with a big toothy grin, and then dived headfirst to the ground below.