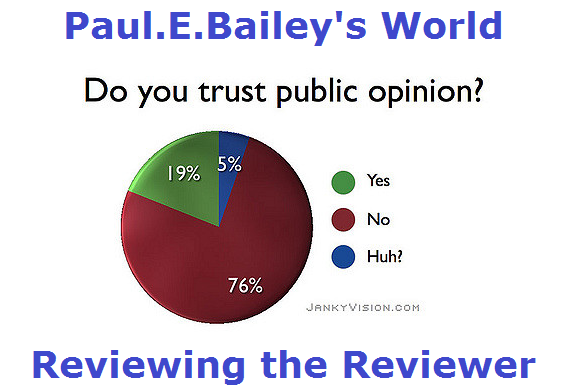 Practically everything our heart covets is right there at our fingertips—literally! If you don’t have a touchscreen mobile phone that connects to the internet then you’re over ten years out of the loop. What else is grand is the fact that, not only can we get most anything we want from the internet, but we can leave reviews for things: purchases, services, articles, you name it. Our voices can be heard (seen) by everyone everywhere. We can make a difference.

Isn’t that great? No longer do we need to send a letter of complaint to head office when we’re peeved about the service at a restaurant. Just head onto their website and write a brutally honest review of your experience complete with the one thing all businesses dread—a one star rating! It’s just as easy to review a positive experience too. Then you can sleep soundly in the knowledge that potential future customers of that business have your experience to go off and make an informed decision.

You know what? I’m really not so sure. I’m not entirely convinced this system of reviews works.

I know you’re there now, screaming at your screen “Why, Paul? Goddamnit, WHYYYYYYY?!” Here’s why…

The answer is really quite simple: people are idiots. There we go. Post over. Let’s all get back to our lives.

Really though, the general consensus of society are just not that bright. We have to consider this when reviewing the reviewer. To use one example, we have the delightful (said entirely tongue in cheek) one star reviewer of my novelette, Dead End, on Amazon. Her comment summed up what an imprudent oaf she was in saying she “Didn’t understand the story”. So I got a one star review, something that has likely put off a number of readers, because of a person who was too fucking dumb to understand a perfectly understandable story. That’s why reviewers cannot be trusted. Some of them really are just morons.

Don’t get me wrong. I’m not saying the system of online reviews is defunct because you get imbeciles reviewing. The system is sort of like Einstein’s Theory of Relativity (Special or General—take your pick). It’s the best working model until something else comes along that’s better. For now, reviews are what we’ve got. It’s basically our job to sort the wheat from the chaff when reading them.

A potential remedy could be that the person about to review has to take a mandatory test and that person is then given a one-to-five star rating on their intelligence. So when Elaine from Billinge gives her one star review on a restaurant that brought her the wrong meal (which wasn’t actually wrong at all, she’s just thick) we can see that she herself is worth only one star and to take her review with the pinch of salt its worth.

That’s not to say that stupid people are responsible for giving overly harsh critique. There are vindictive, uppity clever people out there too; those who are too clever and see it as a means to look down on everything and everybody. Those who see fault in everything. Like on crap TV shows such as Four In a Bed.

The premise behind that show is that four teams of bed & breakfast/hotel owners stay at each other’s place and then score everything whilst adjudging what they believe the room they stayed in should have cost. You can guarantee that on every episode you will get one set of tactical voters. They’ll search absolutely everything in their room for any discrepancy and sometimes even create problems where there are none to justify giving a low score and paying a lesser amount than what the room is worth.

That there is your tactical reviewer. They do what they do likely in the hopes that they’ll receive freebies or money off vouchers. Or maybe they’re just so sad that they literally have nothing better to do. When I see bad reviews I find myself immediately distrusting of the reviewer rather than the place or product they’ve reviewed. That’s how much I distrust people and their agendas nowadays.

A person leaving a positive or neutral review doesn’t tend to have anything to hide. Yes, I know that some five star reviewers will be friends or family of the proprietor or seller. Some people are shameless enough to ask that of others. I know that friends and family used to like my Mixcloud sets to help me achieve high chart positions regardless of whether they liked the set or not. I was also shameless enough to ask that of them as well. The difference is that I wasn’t making any money off people for that. It was all a matter of personal pride.

That said, I find myself tilting more towards good reviews and high star ratings than bad ones. It’s like the ‘dislike’ option on YouTube. I find it so pointless. Maybe I’m just a ray of positivity when it comes to things you see online. A sort of ‘if you don’t have anything nice to say then don’t say anything’ merchant. That’s how I work. Generally speaking—provided the subject matter isn’t something very close to home—I will ignore something that I don’t much care for. I don’t think my negative opinion is so important that people simply must see it.

There’s no real way of guessing who the trolls are without looking at the trend of reviews. If most seem to be of a similar opinion and then one is completely different then that should be enough to set alarm bells ringing. However, that doesn’t necessarily mean they’re trolling. They might genuinely have had an entirely different experience than a hundred other people. You just don’t know.

In conclusion, I think it all comes down to who you are and what your mind-set is. Are you generally trusting of folk? If so then you can probably feel confident that your reviewers are giving entirely honest opinions. I, on the other hand, tend to be very sceptical of the motives of a lot of people. I don’t readily trust strangers. For that reason, I don’t trust reviewers. I will look at the overall star rating of something, but even that I don’t generally take seriously.

With that in mind, ignore the overall three star rating Dead End currently has on Amazon. Ignore that daft twat who didn’t understand my brilliant story and left a one star rating. Trust my totally unbiased opinion that my story is absolutely flawless in every way and get it downloaded today! Then punch a reviewer in the nose!