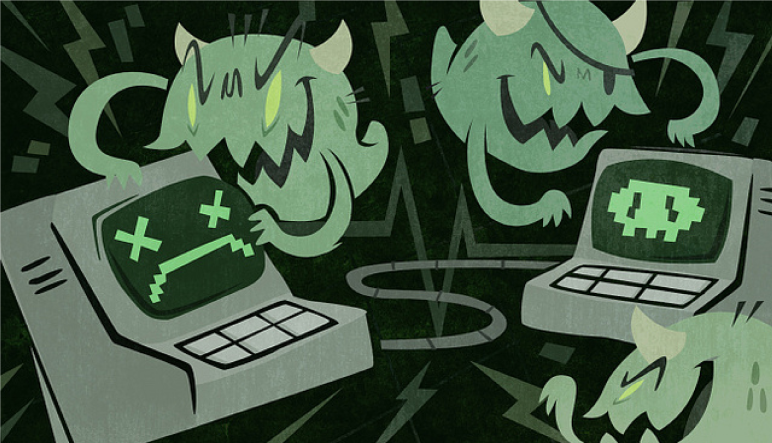 It’s rant time you luck dawgs! This is something I really need to get off my chest because I’m so sick and tired of it.

There are many groups of people that I am infuriated by. People who feel the need to insert themselves into certain niches and cliques are usually the most dull and uninspiring kinds of people. They have no personality of their own so must latch onto a group in order to achieve acceptance. There is one group of people who stand out above the rest though. One bunch of pathetic bastards that aggravate me so much that I go beyond pity for them. I just want to slit all of their stupid throats because they’re utter scum on every conceivable level.

“Who are these people” you cry. Well, you ask because you feel you should at this juncture. To assume you’re desperate to know is very presumptuous of me. Anyway, I digress…these people who I loathe so very much are those sad little nerdy dweebs who create computer viruses, Trojan horses and malware. If you’ve used computers quite a lot through your life then there will be a time where you’ve had to suffer some kind of virus threat at the bare minimum. At worst you’ll have copped for a full on virus whereupon the only cure is to buy antivirus software from the walking cancer that created the damned virus in the first place.

These people are the absolute worst examples of human that walk this planet. They serve no purpose other than to make innocent people’s lives a misery and extort money from them to fix a problem they made happen. Pond life! Very intelligent pond life, I’ll grant them that, but pond life nonetheless. They’re such sad little wankers that they can’t use their talents to help people and earn money justly. No, they must do the opposite and essentially rob folk whose only intention it is to look on Facebook, read articles on Wikipedia, download porn…sorry, erm…stuff or check to see how their fucking blog has performed that day.

This is a great example of how despicable the human race has become. We’re a collective species of utterly horrible, selfish, greedy, two-faced, backstabbing, thieving, uncaring, uncivilised and underhanded scum. Our gift of conscious thought is our very curse. Too often we use our gift simply to be nasty to others and either get one over on them or get something out of them. Reprehensible acts are apparently a damn sight easier than doing good by folk.

What is lacking in the lives of these people who create internet viruses? They’re obviously technical whizzes when it comes to computing and the internet. Think of the possibilities at your disposal with that level of talent. You could work for any company that uses any form of computer. You could make your own pissing computers for crying out loud! If you have the savvy to create something that can affect myriad PC’s, laptops and whatever else that uses the internet then you have the savvy to do amazing stuff that’s far more noble. Why not hack into the accounts of the Rothschild’s and then send everybody on the planet bits of their money? Be an internet Robin Hood!

But no. They won’t do that. They’ll just target the everyman in the hopes that the everyman will just pay what they want then and there for some dodgy antivirus software because they’re scared they’ll lose a shit tonne of work. Lesson one: back up your work and back it up frequently!

The thing about the virus makers I’ve just mentioned is that at least they’re making some money out of their dodgy little scheme. Some people are infinitely more stupid. On Christmas Day 2014, a group of little nobbers named Lizard Squad decided they’d hack PlayStation Network and Xbox Live to render it unplayable for all. They succeeded and in the process really pissed off millions upon millions of gamers. I don’t know how true the story is, but it was apparently some sort of statement on their part against one thing or another. They allegedly did it for the people to screw the hierarchy at Sony and Microsoft. Good going guys. Screw the people at Sony and Microsoft by screwing me…for me! I’m so grateful! Those little bastards ruined my Christmas Day; a day I’d had to fight in order to get off work. There was some form of comeuppance for Lizard Squad though as they were then apparently hacked by a far superior bunch of hackers in retaliation. Don’t screw with gamer geeks on Christmas Day. You will suffer the consequences.

It seems to me that whenever something good comes along that all people can use and for pretty much no cost there will always be some selfish dick who’s prepared to ruin it. Take a park built on a local bit of grass or something. You can guarantee some snot-nosed little bastards will turn up in no time flat to graffiti all over the place, smash bottles of alcohol and generally render the place unsafe for children. Why? Because people are inherently bad! That’s my conclusion. Disagree all you like, but I just think people in general are not nice at all.

The internet is a wonderful place and we should all be able to enjoy it. Soak up everything it has to teach us, enjoy the free entertainment it provides via games, videos and music, keep up with current events, talk to friends, whack off to some dodgy porn…whatever it is we like to do, the internet is a haven we can all head to and depend on for virtually anything. What is it that goes through the minds of these people who feel they simply must spoil it for everybody? What is it that life isn’t providing them that they must become the online equivalent of the aforementioned vandal who wrecks the brand new park so that innocent people can no longer enjoy it? Worse still, then hold their hands out and demand payment for fixing the mess they made? It truly boggles the mind.

There has to be something that can be done about these people. I don’t trust McAfee, Norton or any of the other antivirus makers because I firmly believe they’re the ones creating the viruses or at the bare minimum paying people to make the viruses via dodgy back alley deals. They have to be because if they weren’t then they wouldn’t be making money. Nobody would bother buying their products. Have these companies been investigated? If not, why not?

I know this rant won’t make the problem go away and I’ll have probably painted a target on myself for calling the virus makers pond life and other such things. I take none of it back. I don’t give a rat’s arse what they do. I hate them and I’d like to think that if hell existed then they’d be going directly there and getting sodomised by demons with ten-foot cocks. Though because hell doesn’t exist I’ll wish AIDS upon them all instead.

What are your feelings about internet virus makers, hackers, etc? Have you ever had a problem with your PC or laptop being infected? Were you forced to pay then and there for a certain type of antivirus? I’d like to know what you think and share in my annoyance about these sad excuses for human beings. Just comment below and I’ll get back to you. Thanks for getting aboard the rant train!