Who doesn’t like sitcoms? I challenge you to name me one person.

I’m quite convinced that we all like at least one sitcom. We all like to laugh. Even the most miserable person you know finds amusement in things and sitcoms are a no-brainer for some giggles.

I’ve been into sitcoms for as long as I can remember. I have no idea how old I was when it happened, but I have vague memories of watching Red Dwarf one night in the 80’s. I don’t remember which episode it was, but it was definitely either series one or two because I recall the ship flyby that happened between scenes. I also know I liked it.

Of all TV that has ever been produced it’s doubtless that sitcoms make up the largest percentage of my most-liked TV shows. I rarely take time out of my day to sit and watch TV, but you can be reasonably certain that when I do it’ll be a sitcom or a documentary.

So what makes a sitcom great? How long is a piece of string? It’s a question with so many different answers. Chemistry between cast members; the setting; originality…I don’t know. I’m not a producer.

My friend Mike and I wrote a synopsis for a six episode comedy series and a full script for the pilot about a decade ago. Obviously we thought it was really good. It was about three dysfunctional twenty-somethings living in a flat together that were loosely based on us both and our other friend Adam. Mike and I really got into it and spent a decent amount of time writing, planning and discussing the series. It wasn’t all nights out, getting drunk and trying to pull.

We originally penned the series title (somewhat unimaginatively) as Twenty-Somethings, but after a confab we decided to name it after the fictional block of flats that the three main characters lived in; Pacific Rise. Mike sent the pilot script and the synopses for the entire series to the then fledgling BBC Three for perusal. Our attempt met with failure; something that still stuns me to the day given the absolute rubbish they’ve commissioned over the years. I honestly believe our idea was better than most of the stuff I ever saw on BBC Three and I’m not surprised it’s since been made an online only channel owing to low viewer figures. Yes, I’m slightly bitter, but I think justifiably so.

Sitcoms have been a major part of my life then. Some are better than others. Few are better than some. Then there are those sitcoms that leave a lasting impression on your life. Sitcoms so important that you’ll talk about them with your mates years after they’ve gone off the air.

Here are my top five favourites in no particular order. Brace yourselves… 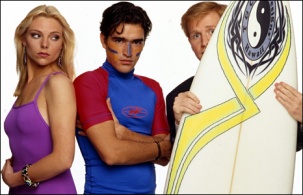 I have to say that I’m somewhat satisfied with that list. I feel bad that Two Pints and Friends didn’t make the list, but the competition was stiff. There was no space for The Fast Show and Auf Wiedersehen, Pet as neither are actually sitcoms by the letter of the law. If they were than I daresay that at least one sitcom on my list would be relegated.

“But Paul; if you’re a geek how come you haven’t mentioned The Big Bang Theory?” The reason for that is quite simple. It’s dreadful! So, so dreadful!

What do you think of my list? Have I got it right in your humble opinion or would I not know a good sitcom if it stamped on my foot and head-butted me? Your feedback is welcomed as always and I’m ready to respond.

Image one and nine from Wikipedia articles ‘Red Dwarf spacecraft’ and ‘Two Pints of Lager and a Packet of Crisps’.